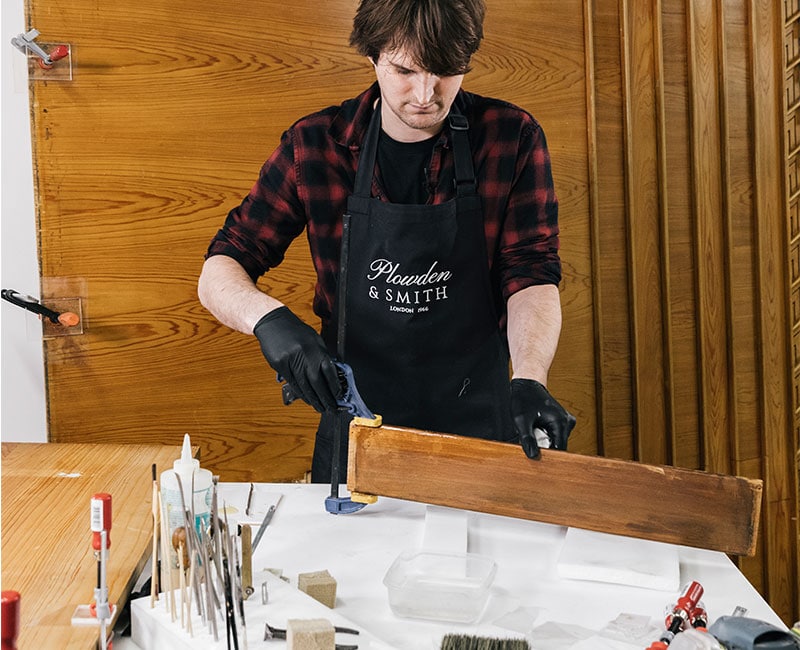 Visitors to TEFAF Maastricht may recognise a few familiar faces from Plowden & Smith in a special short film due to be shown at this year’s event in an area dedicated to TEFAF’s Museum Restoration Fund.

The film, which has been made by the Victoria and Albert Museum (V&A), will give viewers an insight into the V&A’s complex project to restore and redisplay Frank Lloyd Wright’s (1867-1959) office for Edgar J. Kaufmann.

The Kaufmann Office (c.1937) is one of the most important twentieth-century objects in the V&A’s collection, and it is the most complete and original interior by the great American architect to survive outside the United States. Together with one of Wright’s most famous buildings, Fallingwater (for Kaufmann Sr., his patron), the Kaufmann Office is credited with reviving the architect’s career after the Great Depression.

This year, the V&A Museum has been awarded one of only two TEFAF Museum Restoration Fund grants, which will support the cleaning and restoration of the entire Kaufmann Office, ensuring the stability of its structure and allowing it to go back on public display.

Much of the restoration work is being carried out by Plowden & Smith. Plowden & Smith’s Senior Furniture Conservator, Oliver White will be conservation cleaning and restoring the wooden interior elements of the Kaufmann Office, including the panelled walls, ceiling, freestanding and fitted furniture; whilst the V&A’s inhouse textiles conservation team will be conserving the original office carpets and upholstery.

Despite Edgar J. Kaufmann’s great wealth, the interior of his office is constructed largely from decidedly modest materials, including cypress plywood and cypress-veneered blockboard, which would become a recognisable feature of Kaufmann’s later work.

Christopher Wilk, the V&A’s American-born keeper of furniture, textiles and fashion and Frank Lloyd Wright expert, recalls the popularity of the office when it was last on public display (from 1993 to 2005), describing it as “a mecca for architects to come to”.

The Kaufmann Office was presented to the V&A in the mid-1970s by Kaufmann Jr. Once the restoration is complete, office will go on public display in the V&A’s new Collection and Research Centre, due to open in 2023. One of two new V&A public venues currently under construction in Stratford’s Queen Elizabeth Olympic Park, the Kaufmann Office is set to become one of the highlights of this new V&A East complex.

Find out more about our furniture restoration services here